If you were standing in Atmeh in the northwest of Syria in front of a two-story yellow-red building with small, barred windows, you wouldn't believe it to be one of the largest hospitals for gynecology, obstetrics and pediatrics in the entire Idlib province. And it is in this hospital focused on the health of women and children that MAGNA is also providing medical assistance. 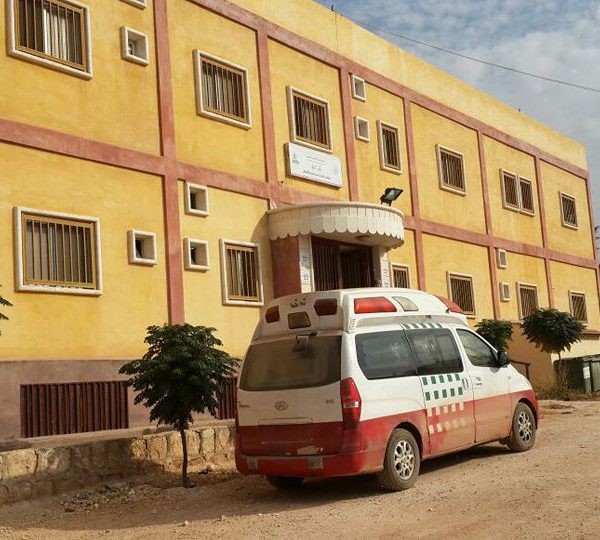 Noise in the hallways, babies crying, low voices, dozens of small patients or adult women awaiting examination. But there is a tense silence in the room where several babies are battling for life in incubators. Newborns are battling common jaundice or other diseases, but many have been struggling for life since birth, and Al Ekha Hospital is where they will stay now how a while. Like for little Salam.

Salam was born prematurely during a bombing at another location in Idlibe. She was only 1.5 kilos, needed immediate intensive care in the incubator. She was taken to a nearby hospital, but with the oncoming air raids, she and her other children were taken to another hospital. The Syrian army and the Russian Air Force often bomb also medical facilities (according to the UN, since May, bombs hit 51 medical facilities in northwest Syria). As it turned out, even the second hospital was not safe enough, so the children who fought for life were moved again, this time to Al Ekha Hospital. Only here could Salam be again with her mom.

The hospital admitted her to the incubator, but her mom had to move elsewhere for lack of space. After a week the condition of the girl stabilized and the hospital could release her. But her parents seemed to disappear. The staff did not know where they were living. Under which tree, or in which small plastic stands, among the hundreds of thousands of others on the run. Eventually they found her parents in one of the camps near Atmeh. They live in a small shelter with other families. No basic needs, no water or electricity. With tears in her eyes, her mother begged the staff to leave Salam in the hospital; in the shelter she might not be able to survive.

The largest set of refugee camps is set around Atmeh. There are hundreds of thousands of Syrians who have escaped from other parts of the country before the war. Just minutes from our hospital there are huge tent cities. They consist of thousands of shelters and tents, white, blue, gray. And just behind one of these settlements is the Turkish border, fortified by a concrete wall guarded by the army. So that people in need cannot run away.

The exact numbers are unknown, but it is estimated that more than half a million people live in the Atmeh neighborhood. More than half of them are children. Their numbers are steadily increasing, especially after government troops have been attacking the last territory under rebel control for several months, the province of Idlib. The vast majority of the more than 3 million inhabitants of Syria's northwestern tip are civilians.

Atmeh's Al Ekha Hospital is in the middle of everything. Close to people who need medical help. MAGNA has been supporting it for several years. Our projects focus on the health of pregnant women, pre-natal and post-natal care, as well as childcare. At the same time, we focus on helping victims of sexual violence and educating medical staff. The hospital treats more than 5,500 patients every month. Doctors perform all necessary procedures. Caesarean sections and complicated births provide life-saving treatment to newborns, but also treat common childhood diseases, pneumonia, or complex infectious diseases such as lajmaniaosis or meningitis.

MAGNA supplies the hospital through cross-border humanitarian aid from Turkey, where medical supplies and medicines come from. Al Ekha Hospital helps everyone, regardless of gender, racial, ethnic, religious or linguistic affiliation to any population, as well as whatever side of the Syrian conflict they stand on.

Here are a few numbers that capture the intervention of staff at Al Ekha Hospital supported by MAGNA in 2018: