Read More
Children with families walking along the tracks that connect the southern Serbia's border with Hungary. The rails lead them to safety. But walking on a railway is tiring. People are scared, many of them suffer from pain after several weeks of marching. On the boarder they crawl under barbed wire, some of them with their last remaining strength. On top of that, they have to cope with the police and people in transit countries who stand against them. In Greece and Macedonia they beat them and threw stones at them. Pregnant women were fainting during the trip. „There is no help and no ambulances,“ said a woman in tears. With your help, MAGNA medical teams help these people right in the field.

We save directly in the field

„There are crowds of people, and everyone needs treatment. In the morning we treated newborns and infants that were not even three weeks old. Along the rails come hundreds of children and old people. Most of them are injured and severely dehydrated. From early morning we have treated dozens of children and women. We have had cases of respiratory diseases, high fever, skin inflammation, broken extremities,“ says MAGNA nurse Barbora Zuštinová.

The Hungarian authorities have become congested by the number of arrivals. More than 2,000 refugees arrive every day. Only yesterday 2,500 came. The registration process, which allows refugees to go to Budapest and then maybe to Austria and Germany, is slow. The worst situation is at night. Temperatures dropped and the refugees have a huge fear of what can happen to them.

Zeina from Syria: I hate war, it took everything from me.

A new camp for recent arrivals emerged from the collection point. Visibly exhausted, they are standing in line for food and water. Bassel and his wife and their two children walked 50 km with injured feet, dehydrated and scared. The children cry and have a fever. „I hate war, it took everything from me,“ says Zeina. "My family, my home, my life, I want someone to help stop this killing." Jodee in the seventh month of pregnancy, she was bleeding and in pain for the last three days. „We treated her in a state of total exhaustion. Unfortunately later they confirmed our concerns, that the fetus has not moved, and Jodee lost her child. There are plenty of such cases,“ explains Lubica a nurse from the MAGNA team.

MAGNA employees guide new arrivals to a collection point for treatment. During the day, we treated 400 children and their parents and were distributed 200 hygiene kits. The people do not even have drinking water, lack an ordinary soap to wash themselves or their children.

Therefore, they were thrilled from any kind of help. We help on the spot. Help with us. 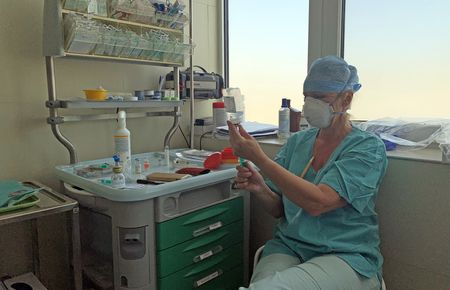 MAGNA is helping at home because it is needed there now

MAGNA will provide material assistance, health and education services to the Slovak elderly in retirement homes and protective equipment to oncological patients in response to the COVID-19 pandemic in Slovakia.