“The war in Syria is one of the biggest disasters in history,” MAGNA operations director Denisa Augustínová told DVTV, a Czech internet television, more than four years ago. At that time, for several days and nights, she helped coordinate teams to evacuate hundreds of children, the wounded and the sick, from eastern Aleppo. More than 40,000 people were hiding in the besieged part of the city. For half a year, they lived in the midst of fighting without food, drinking water or medical care.

“We helped the wounded after the bombing and the fighting, the children, the elderly. Even today, when I recall it, my emotions come back to me in full force. It was something we could hardly influence in any way; we were just trying to get as many people as possible to safety and out of range of the fighting. Every single bus that left eastern Aleppo was not a small but a big victory for us,” recollects Denisa, noting that everyone was worried sick hoping the soldiers would not attack the buses.

The evacuation was actually a violent eviction in violation of international humanitarian law. However, the people of Aleppo had no choice but to save their lives. Chaos reigned at the stands, everyone tried to get on the buses. “We cannot imagine what parents who sent their children to safety had to go through with the possibility that they would never see them again in their war-torn country,” says Denisa, adding that many evacuees still live in makeshift camps in north-western Syria.

One of the worst disasters

Even ten years after the start of the Syrian conflict, Denisa considers it one of the worst man-made disasters ever. The worst thing is that the war in Syria is still not over, millions of people are suffering and starving in unimaginable conditions.

The war in Syria is far away, but not far enough for us to ignore it completely. It almost disappeared from our media after the end of the refugee crisis, when people fleeing the horrors of war tried to reach Europe. For many, the door closed. They remained imprisoned in the middle of the war.

But almost 600,000 dead and millions of injured with permanent impacts on body and soul cannot be overlooked. Half of the pre-war Syrian population had to flee their homes; many have been living in miserable conditions in neighbouring countries for years. Millions more live in makeshift camps right in Syria, they will no longer be able to cross the border. A destroyed country, destroyed infrastructure, destroyed people, destroyed lives.

The international community, led by the United Nations, has failed. Even after 10 years, it has not been able to stop the conflict, punish the attacks on medics and civilians, or penalize the use of chemical weapons. “In April 2017, we treated 47 victims of one of the chemical attacks at Bab Al Hawa Hospital, supported by MAGNA. Many had severe respiratory disorders, nervous disorders, foam around the mouth, characteristic of the consequences of chemical weapons attacks. At least seven people did not survive, and three members of the medical staff helping with patients affected by the chemicals also ended up in the intensive care unit,” says MAGNA director Martin Bandžák. The affected medics were helped by the respiratory support devices that the hospital received thanks to MAGNA’s humanitarian aid.

The Syrian conflict has also brought inhuman torture, rape, slavery and many things we cannot even imagine. It is difficult for victims to talk about them even after months of therapy with a psychologist. 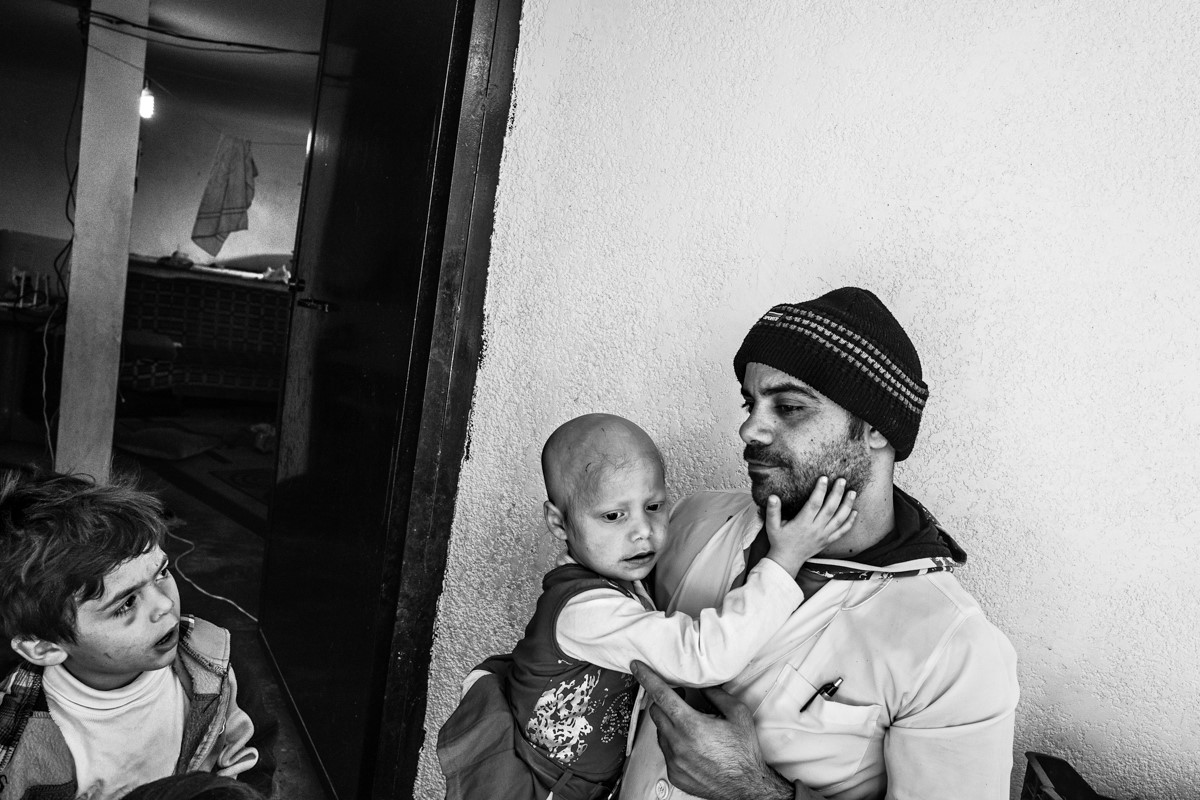 Psychologists have found it difficult to reach the wounded soul of 8-year-old Nayla, a Syrian patient of MAGNA in Lebanon, a country that is home to 1.5 million Syrian refugees. It was the girl’s father who helped them. They come from the Syrian Rakka, where they lived during the most brutal rule of the Islamic State. One day, Nayla slipped out of their relatively safe home and went looking for her friends because she wanted to play. What she saw, however, is difficult even for adults to process. The fighters of the Daesh-Islamic state played football on the street. With the heads of her friends for whom she went out searching. She could not sleep for a year, walking only on tiptoes and not leaving the safety of her home. Then they fled. For the most part, they ran during the night in the dark, during the day they tried to rest, and after the horrors they experienced, sleep did not come. Today, they live in Lebanon as refugees, and the therapy is working with varying degrees of success.

These are the invisible consequences of the Syrian war. Numbers that would normally be shocking have already lost this ability. As many as three-quarters of Syrian refugees may, similar to Nayla, suffer from post-traumatic stress disorder from experienced horrors and violence.

For MAGNA teams, the evacuation of civilians from Aleppo was not the last one. During the ten years of the conflict, they provided medical treatment in ten hospitals. The hospital in the area of northern Homs was also in danger, and it had to be moved for security reasons.

The conflict in Syria has completely changed the delivery of humanitarian aid. “A cross on an ambulance or on a hospital used to offer a protection from an attack, but our mobile clinics in Syria cannot be labelled as providing medical assistance because we would immediately become a target,” explains Denisa Augustínová, adding that international humanitarian law in Syria has not worked and it is not working. “Attacking medical facilities is used as a way to wage war.”

People fled the violence of all the groups involved in the fighting, hospitals moved, and many, whether from Aleppo, Homs or other areas, ended up in huge camps in the north-west of the country for many years. “If you look into the distance at one end of the camp, you will see nothing but a sea of blue and white makeshift tents,” say our co-workers in Atmeh area. Part of the humanitarian aid that MAGNA delivered to Syria from the Czech Republic and Slovakia ended up here at Al Ekha Hospital. 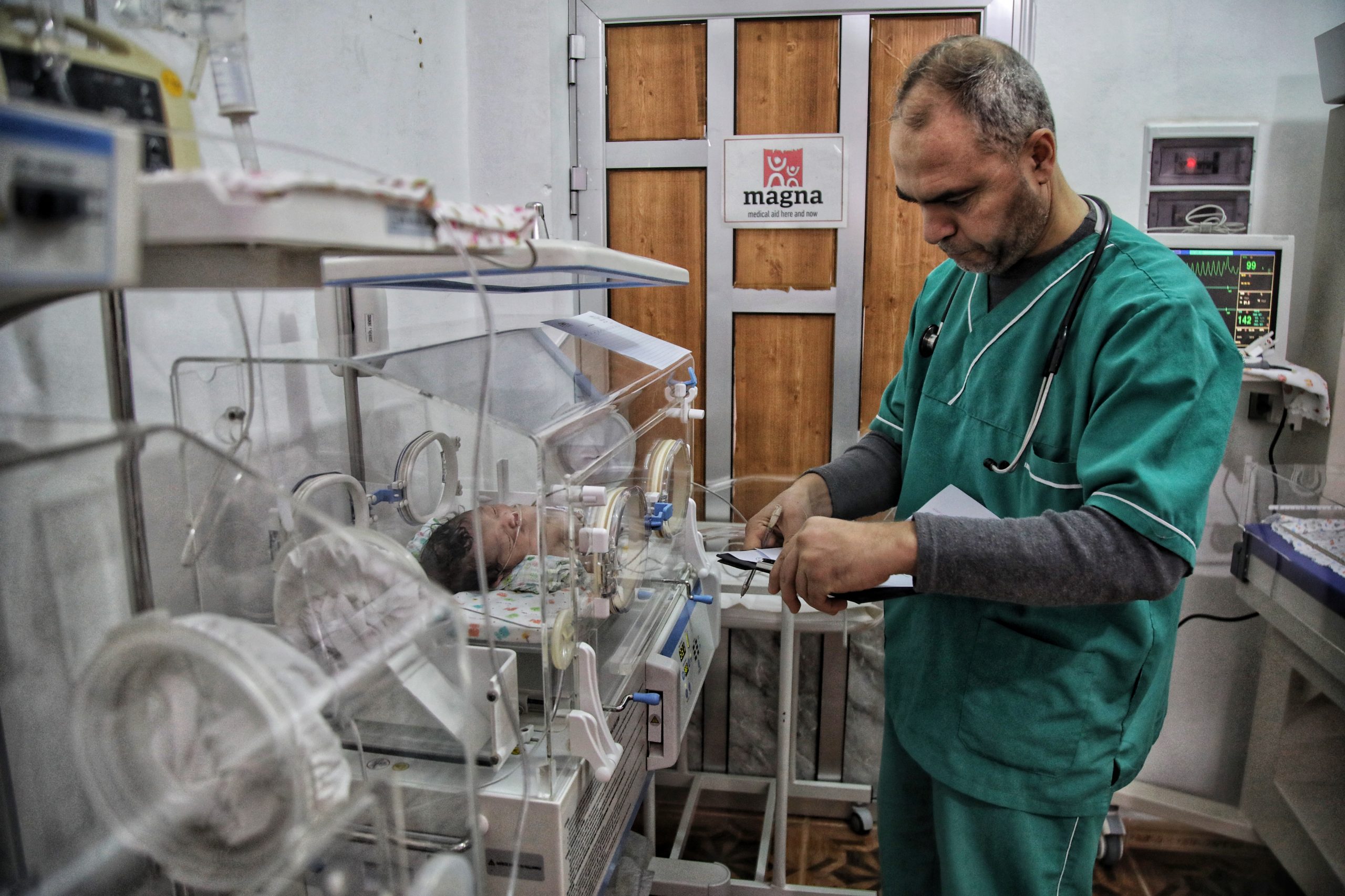 The incubators have given hope for life to many newborns. Almost 5 million children were born in the war. Like little Salam, who was born prematurely during the bombing. She weighed only 1.5 kg and needed immediate intensive care in an incubator. She was moved from one hospital to another due to air raids. It was only at Al Ekha Hospital, where MAGNA also operates, that she was safe with other newborns and could be with her mother. “The hospital accepted her into an incubator, but her mother had to be moved elsewhere due to lack of space. After a week, the girl’s condition stabilized and the hospital could release her. But her parents seemed to disappear. The staff did not know where they lived. Under which tree, or in which small plastic tent, among hundreds of thousands of other people on the run. Eventually, her parents were found in one of the camps. In a small shelter with other families. No basic needs, no water or electricity. With tears in her eyes, her mother begged the staff to let Salam stay in the hospital, she would be in danger of dying in the shelter,” describes Martin Bandžák one of the common experiences of MAGNA medical staff.

Even in those parts of the country where fighting has already ceased, healthcare is not improving, or is improving only slowly. Half of the 113 state hospitals and more than half of the 1,790 public health centres operate only partially or not at all. Many medics have fled the country or died. Only a fraction remained to provide help.

MAGNA has helped hundreds of thousands of Syrians in Syria and in neighbouring Lebanon. In recent years, we have supported 10 hospitals in Syria, in which more than 3,000 children were born with our medical assistance. We have provided treatment and medical consultations to more than 225,000 people.

In Lebanon, we not only treat Syrian refugees, but also provide children and adults with psychological treatment to help them deal with the traumas caused by violence and the horrors of war. Over the years, more than 5,000 people have taken part in MAGNA’s psychological health programs. In the clinic and in mobile outpatient clinics, we have treated and provided medical consultations in more than 100,000 cases.

Behind each number lies one human life, one life story of a particular person.